The other day when I was taking a stab in the dark and riding off in a new direction I came across a sign on the side of the road that piqued my interest: 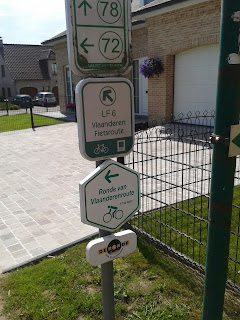 So I followed it for a while and before long found myself riding along some beautiful country lanes away from the busy roads, with my friends the ubiquitous wheat and corn fields. 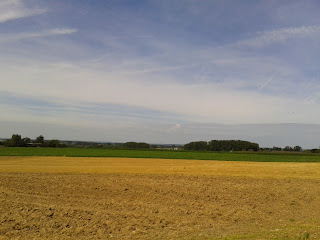 At each sign I noticed it still said 114km, so either I was on a giant treadmill not moving anywhere, or this was a loop. Of course it was a loop - a tour of Flanders. I didn't have time to investigate the whole thing that day but decided it would be a good one to come back to and check out in its entirety some time soon. That day ended up being Wednesday this week, with clear skies and everybody off work for the national holiday of l'assomption. I expected it to take maybe 4 - 5 hours, including getting to and from the loop from where I'm staying in Enghien, some 15km away. People go on about how flat the land is in Flanders, so I thought this seemed reasonable. What I missed from what people go on about is that this loop in primarily just in the Flemish Ardennes, which is riddled with hills and bumps of all shapes and sizes. So, 114 very up and down kilometres as I was to find out. 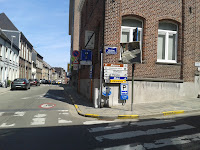 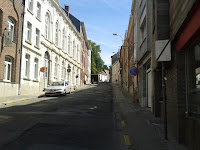 I joined the tour route at Geraardsbergen, most famous in cycling for its cobbled climb up the Muur van Geraardsbergen, or "Kapelmuur" because it leads to a chapel at the top. It's the scene of many famous attacks, such as Cancellara in 2010. Listen to the crowd! 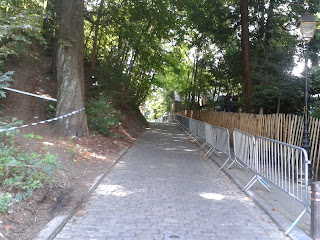 There are a few cafés/bars on the way up, all of which were packed to the gunnels with people enjoying a crisp Belgian in the sun. I chose instead to carry on towards the next feature of the parcours, another pavé climb called the Bosberg. 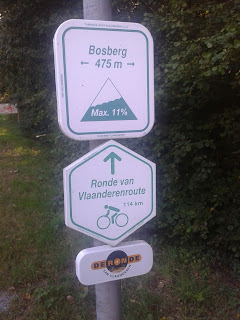 This one isn't as steep, but the surface is a bit rougher because the stones have loosened over time and become more spaced apart. Getting towards Kinderkoppen status ("children's heads" as the cobbles are known colloquially) but worse was to come. It's quite a nice ride through the trees at a moderate pace, but I can imagine it being quite another thing after already 250-odd kms at a hectic pro race pace.

Not long after this I caught up with an older gentleman cruising along on quite a flash road bike, in nothing but Sidi's and bib shorts with the straps off his shoulders dangling around his waist. His skin was like leather, tanned so as to be I imagined tougher than that of his saddle. He spoke a little French so we chatted briefly, and it turned out he'd already been for a ride that morning out to Bruges. I asked him about the route I was following, and he said that it ended about 3 or 4km up the road. I was a bit confused by this, as I didn't think a loop could really end, as such. How long is a piece of string? How about if you lay it out on asphalt? Well it turns out that the route just turns in on itself briefly, before heading back in a generally Westerly direction that goes north of Geraardsbergen.

The day was heating up and I had with me one bottle of water and three muesli bars. Just to be on the safe side I had some money too, but I probably overestimated the power of my budget as €5 doesn't go all that far. I stopped off at a Frituur for a can of Coke, and realised once I'd stepped in the door that I still hardly know any Dutch. The two guys working there looked to be training buddies with Arnold Schwarzenegger, but both greeted me cheerily. I suddenly felt embarrassed and, not wanting to greet them immediately in French, nor presuming to just speak English straight away, I hesitated tongue-tied until the gears started turning in my brain and I remembered hello. Suitably delayed so as to be quite awkward and almost out of context. I quickly got my can out of the fridge and paid the man, slinking back out the door with a sheepish nod of thanks and a mumbled "dank u". 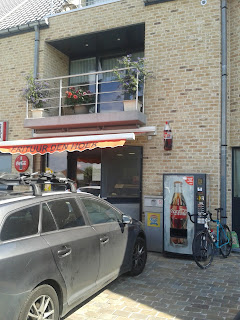 My communication problems couldn't possibly get any worse than this I decided, and so rather than shy away from these occasions I promised to make more of an effort and approach people more readily, with less concern for the accuracy of my utterances. Any greeting is better than silence. I really don't like the feeling of not being able to express myself (I don't imagine anyone does) but especially when I'm generally able to in French, and just down the road it's back to square one again for me in Dutch. 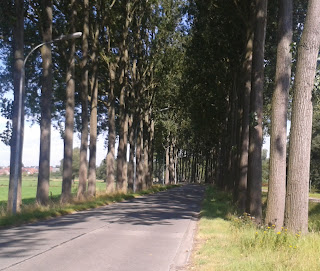 So after a nice cruise down a tree-lined boulevarde I was trying to decipher which direction to interpret the sign as indicating, when a couple came to align their map with the same sign. They were from Gent but as I found out after somehow explaining my lack of Dutch in my non-existant Dutch, they spoke some French. It seems most Flemish people do at least speak a little, but whether they're happy to use it is another question. At least that's what all the French speakers I have met have to say about the Flemish, but so far I've found them to be quite happy to speak French with me. I suppose it's that or nothing though. I keep my English a secret until it's absolutely necessary, then pull out the trump card - I'm a New Zealander. They love it.

As the green route leads me deeper and deeper into the Flemish countryside, I start to notice a few things. The roads seem generally to be in better condition in this part of the country (I read that Hainaut, where I'm staying and the province just south of East-Flanders, is the lowest socio-economically) as is the state of the properties bordering the road. The gardens are so pristinely kept, the brick façades of houses immaculate. Finally the consideration given to cyclists by way of cycle paths and lanes at all times is quite significant. 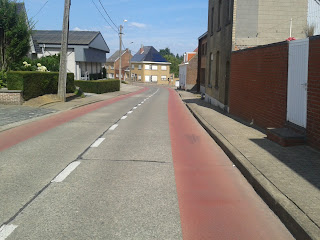 I'm fairly well disorientated by this point, and hoping that as long as I follow the hexagonal signs placed at every intersection I'll make it out alive, before dark. But sometimes there's an intersection without a sign, or an arrow pointing straight ahead towards a road that splits, veering off in multiple directions. This became quite a common theme for the ride, and at one point caused me to have to double back after a kilometre or more of some pretty juicy "koppen" 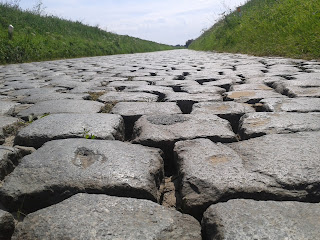 As time passes, so washes away the mortar or whatever is used to secure the stones, until all that is left is sand and debris between them. This has a tendancy to make it quite a "rock 'n' roll" ride sensation. With eyes rattling around in your skull desperately seeking the smoothest line to take, trying to avoid the ruts and holes caused by cars and erosion, and every ounce of flesh on your body quivering like you're riding a compactor, it's quite an experience. Quite an unpleasant experience, it turns out, especially after a few hundred metres. I really gained an appreciation for the guys who race Paris-Roubaix and the like, doing it over and over for six or more hours.

Eventually I broke out onto some of the smoothest tarmac I've ever encountered, and a view of the countryside just out of Oudenaarde.

This is a beautiful town, once again immaculate and unified in its elegant aesthetic. I made my way into the centre, partly by accident, but the signs had stopped and so I wanted to see if I could find some information about where to go. I needn't have worried, as low and behold I stumbled upon the Museum of the Tour of Flanders, of course. 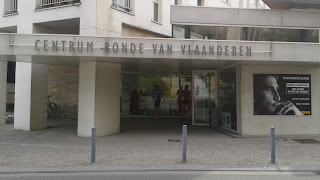 I wasn't really expecting this, so of course I briefly ventured inside to have a peek and hoping to find a vending machine to get another drink. I would have loved to visit the museum but I wasn't really in the best state of attire or comfort for that kind of thing. I got a coke and a fanta, and refilled my water bottle in the toilets. Where I spotted this humorous wee number, so to speak. 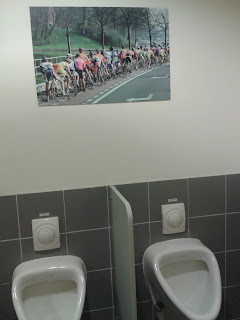 Out the front they have a nice display set up: 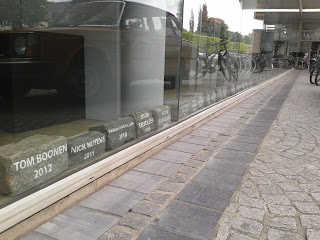 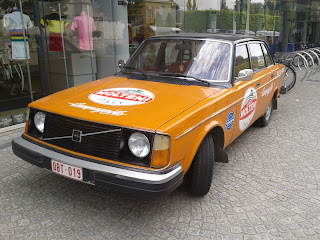 I found a map of the green route I had been following, along with a red and a blue route, which both take in different parts of the area. The red being more hilly, the blue being more cobbly. 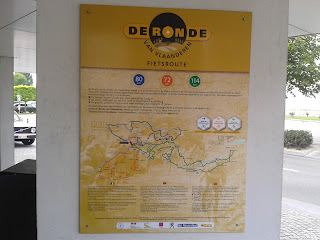 I'd been riding for about 4 or 5 hours by now, and was looking forward to heading back in the general direction of home, as that is where the green route should logically take me. But of course it wends its way up and down and around much more than I was expecting, and so took significantly longer than it appeared it would.

At one point on the way back I stopped at a small tavern to ask for directions and for some water for my bidon. There were two cool old guys sitting out the front smoking and drinking, and both were keen to help. We had a hilarious conversation with bits of French, English and Dutch all mixed together trying to understand each other, with the net result being that they knew the route of the race and that it passed right by and up the hill in front of me. 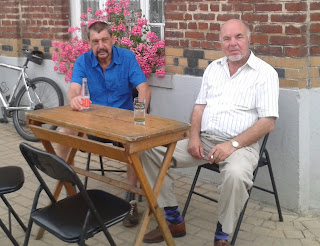 I went up the hill and sure enough, there was the green hexagonal sign I had been hoping for. Dank u gentlemen.

Due to the combination of my fatigue and therefore inattention, the occasional moss covered or otherwise misplaced sign leading me back and forth it wasn't for another 3 hours that I finally made it back home, exhausted but satisfied that I had got through it. That is to say, I had got through half of it. I realised, sitting down having a cool drink at home, the red and blue routes are still waiting for me to explore them - I had only covered half of the race, a small amount of the cobbles, and not the steepest of the climbs. As they say over here, chapeau to the riders.

Zander
My name is Alex, I’m from Wellington, New Zealand. After spending a season racing against the best cyclocrossers in Europe and the USA I have returned to New Zealand for another winter of 'cross racing, seeing it grow and grow!